Seven years after the Ethereum whitepaper was released by its founders, the network has achieved remarkable feats both as a cryptocurrency and as a DeFi chain over the years.

For a start, the widespread adoption of Ether (ETH), the network’s native cryptocurrency, has soared from its inception till date, with Ethereum miners recording a massive milestone yesterday of mining ten million blocks.

The news sparked celebration in the crypto community as it goes to explain that the second-largest cryptocurrency by market cap is gradually gaining mainstream adoption.

Since the Ethereum blockchain was launched to date, the total number of unique ETH address is just a stone throw from reaching 100 million, as the number currently stands at 96,283,830, at the time of writing.

Notably, since Ethereum went live in 2013, the lowest number of new ETH address that the network has recorded in a single day was 41, and that was recorded on August 6, 2015.

Interestingly, the network gained the recognition it deserves in early 2018, the period when the 2017 bull run was slowly washing off the cryptocurrency markets as ETH traded at $1,034.

The number of new ETH address documented in a single day spiked to a whopping 355,726 as of January 4, 2018. The network has since seen over 100,000 new addresses being created on a daily basis.

However, even though the total number of ETH addresses is almost at the 100 million level, data from Bitinfocharts reveals that the active ETH addresses on the network are less than 500,000.

That is less than 1% of the total number of unique ETH addresses currently registered, and it comprises of only ETH addresses that conduct daily transactions. At the time of writing, there are only 380,651 active ETH addresses.

On-chain data from leading cryptocurrency intelligence data provider, IntoTheBlock (ITB) shows that only 150 unique ETH addresses, comprising of addresses from both whales and investors, own 40% of the entire ETH in supply. 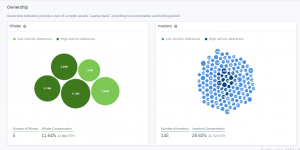 Hegion reported earlier that only 10 ETH addresses hold 17% of the entire ETH in supply, according to a recent study of the top 10,000 ETH addresses by Adam Cochran, Partner at Metacartel Ventures.

This article originally appeared on Coinfomania.